Just hashing out a couple of thoughts.... I have a robust friends list on Ye Olde FB. Some of those friends, admittedly, I've never met in person. We have shared hobbies, and in one case, were happy enough with a conversation through a mutual friend to click the request button. Most of that list, though, are people who I've actually had in my life. Sometimes it's the warm fuzzy of remembering someone. Sometimes it's the curiosity of how someone's life turned out after a couple of decades apart. Sometimes it's new friends. Sometimes it's a completely unique set of circumstances that leads me to be thrilled to be able to reconnect. There isn't anyone on that list that I wouldn't sit down and have a cup of coffee with. I have a pending request from someone who, many years ago, absolutely shredded me. Saw me respond to someone from our past. Has been sending me messages about his current life. You're not in jail, and you're not dead. That's as much as I want to know. I don't wish you ill or harm. I just don't want you, however tenuously, in my current sphere. Telling me that it's "funny how the universe works" because we have kids the same age.... no, that's not the universe, that's simple effing probability, since we're the same age. I don't expect that the person who contacts me now is the same person who I left behind. I'm not the same person who left that person behind. But there is nothing about that request button that says "I have grown," "I am aware of what I changed from," or "I am sorry about how things were so long ago." Clicking accept means, well, acceptance without any of that. And I can't do it. I'm choosing to maintain my list as people I'd be happy to sit and have a cup of coffee with.
Posted by gems and purls at 10:54 PM No comments:

Well? Should I bother?

sorting iTunes alpha by song title and tracking how far into the alphabet you get each listening session = librarian shuffle.
Posted by gems and purls at 8:32 PM No comments:

thoughts on how to blog

This is, quite literally, a 'note to self'.

I got called out by a couple of moms on the school playground the other day: Will ya get on Facebook already?

Today I read an article in the NYT, linked by Boing Boing, about "ambient awareness"; and it summed up why I've been reluctant to go beyond this blog and into the world of Facebook, Twitter and the like.(I was dragged kickin' & screamin' onto LiveJournal, but only because it's the only way to keep up with one of my friends. And she's on
Facebook now too.)

"For many people — particularly anyone over the age of 30 — the idea
of describing your blow-by-blow activities in such detail is absurd.
Why would you subject your friends to your daily minutiae? And
conversely, how much of their trivia can you absorb? The growth of
ambient intimacy can seem like modern narcissism taken to a new,
supermetabolic extreme — the ultimate expression of a generation of
celebrity-addled youths who believe their every utterance is
fascinating and ought to be shared with the world. Twitter, in
particular, has been the subject of nearly relentless scorn since it
went online. "Who really cares what I am doing, every hour of the
day?" wondered Alex Beam, a Boston Globe columnist, in an essay about
Twitter last month. "Even I don't care."

But then, I can think of the little things that would be fun to have
in those little up-to-the-minute boxes. Updates on what I spritz,
read, knit, listen, cook, eat, ponder. A lot of those little things
get scattered into unconnected boards and sites, or filed away until I
have more time to write a coherent (stop laughing) blog post about
them en masse.

So I might make the little skip-jump over to FB. Honestly, though, I'm
unsure about the amount of setup time. But it's got to be better than
feeling like I'm yelling into a static page, right? 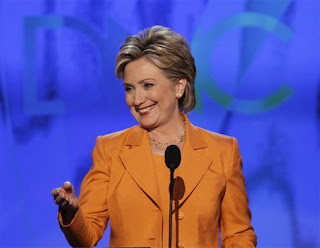 I rock the sari that rocks the party 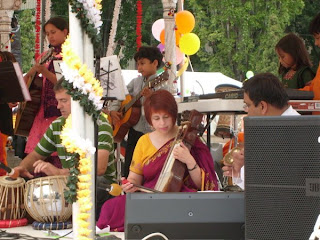 Posted by gems and purls at 8:52 PM No comments:

Songs I want to cover

'Opportunities' by the Pet Shop Boys.
Posted by gems and purls at 12:21 AM No comments:

Labels: songs i want to cover

The Soundtrack of Your Life: a Meme

Here's how it works:

1. Open your library (iTunes, winamp, media player, iPod)
2. Put it on shuffle
3. Press play
4. For every question, type the song that's playing
5. New question - press the next button
6. Don't lie and try to pretend you're cool

Opening Credits: "A-Punk", Vampire Weekend.
Aye aye aye aye! Nicely enough, this album makes me nostalgic for General Public and other stuff I enjoyed as a teen. It's not quite English Beat.

Waking Up: "Judy, Judy", Archer Prewitt.
Sounds like I need lots of coffee. This isn't the kind of thing I'd usually listen to in the morning, unless it was a lazy Sunday and I had the day off to myself to read and knit. Which rarely happens.

First Day At School: "Conquer Worm", Bill Laswell.
I haven't actually listened to this before, but what a great song title. Does conjure the twitchy boredom of school.

Falling in Love: "Mic Check", Cornelius.
There is no way I was ever smooth when falling in love. Maybe this song is just some nice irony. Or maybe it's about not being able to speak well when I would get a crush.

Breaking Up: "Stuart", the Dead Milkmen.
I don't think I've ever actually told someone that I like him/her because they know what the queers are doing to the soil. And hopefully I didn't sound like that much of a loon during a breakup.

Prom: "Restless Soul". the Proclaimers.
"It drove you on, twenty-five years ago, it'll drive you tomorrow. It can't stop, it'll drive you til you drop, restless soul.... You feel like there's a curse putting you to the test, but you've been blessed.... You're always looking for a place your mind can rest, it's not there, it's not there. So drift away, let tomorrow have today while your dreams take tomorrow..." Maybe this makes more sense as a retrospective. What I actually remember dancing to at my prom was Tainted Love by Soft Cell.

Life's Okay: "Standing in for Joe", XTC.
I'm going to cheat because this is too silly and not fitting with my life whatsoever. But I get something by Konono 1, and then Civilians by Erin McKeown. Ah, "The World's Address" by TMBG. Hmm. Wish I could substitute some other XTC song.

Mental Breakdown: "Sunday", Bloc Party.
Heavy night.... This does sound like driving to the water and moping, which I certainly did. Ah teenage life in New England.

Driving: "Ackee 123", English Beat.
I do remember driving around with What Is Beat in the car, but this isn't on that tape.

Flashback: "Hold Back the Rain", Duran Duran.
I never went through the OMG DURAN DURAN phase that a lot of my cohorts went through, but I did love the albums.

Getting Back Together: "Can You Heal Us (Holy Man)", Paul Weller.
Hang on tight, hang on strong.

Birth of a Child: "I Need You", the Eurythmics.
Right song title, completely wrong song sentiment.

Final Battle: "You've Got Everything Now", the Smiths.
So apparently I lose and I'm a whiny loser.

Death Scene: "On and On (Acapella)", Eryka Badu.
Peace and lessons manifest with every lesson learned.... Can't you just see this, cinematically. I'm not really cool enough to die to this, but I'd aspire to it.

Funeral Song: "Hail! Men o'War's Men", from HMS Pinafore.
Poor little buttercup, dear little buttercup.... And apparently this causes some snickering. I don't know the plot of this Gilbert & Sullivan well enough to know what's going on at this point in the story.

Posted by gems and purls at 5:36 PM No comments: